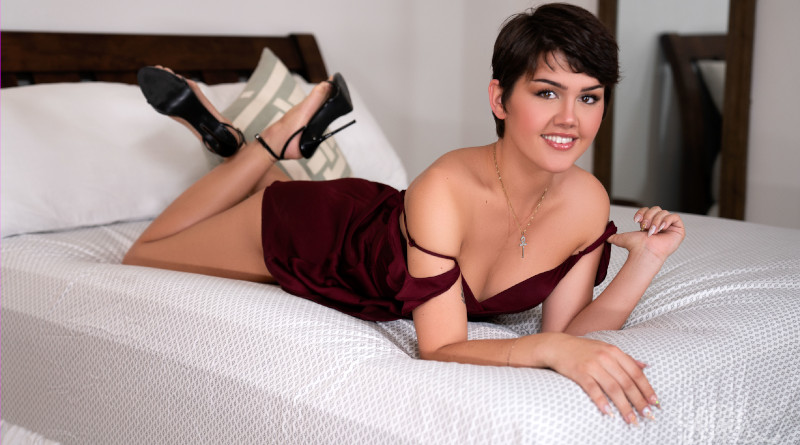 I’ve included where you can find their sexiest scenes and work, but you can see these hot tranny babes on the tube sites for free too.

You may have even heard of a few of them.

Right now Daisy Taylor is living in LA California and holds the crown for the hottest Shemale.

Where else can I see her?

Daisy Taylor is contracted to the amazing TransAngels. This studio seems to be getting the best out of her too, the trailers for her scenes are absolute fire.

Despite being bisexual, Daisy seems to work mostly with guys and the chemistry she creates is very visible. TransAngels said:

Daisy brings something special to the table. She’s not just a pretty face, perky set of tits, and huge cock: Daisy Taylor exudes that indescribable “It Factor” that is so rarely observed but so often loved.

I can’t help but agree.

Check out more TransAngels trailers by clicking the banner.

Where can I see more of her?

Although she is not contracted like Daisy Taylor, Natalie has shot 20 scenes for TransAngels.

However, because the world is waking up more to trans issues and Chanel was already a beautiful young shemale by her 18th birthday.

Where else Can I See Her?

“TransSensual was launched in 2015 to fill a void of high-end transsexual erotica while preserving a mutually respectful way of dealing with transgender performers and fans who are looking for a more sophisticated experience. The stars of TransSensual come from diverse backgrounds, so you will find some familiar faces from other Mile High sites such as Nick Capra or Connor Maguire, and of course the big names such as Jessy Dubai, Sunday Valentina or Aubrey Kate, who predominantly perform on TransSensual.”

She keeps a great blog at officialaubreykate.com, where she keeps her fans up to date with award nominations and new releases.

Where can I see more?

I would kill to have access to her wardrobe, which includes everything from vintage dresses to sexy lingerie. Bailey has won heaps of awards too, including AVN best performer of the year.

Victoria Gar is one half of Vicats, the other half being Milla who is a cis-gendered female. They are two lesbian girlfriends from Warsaw in Poland.

Vicats are the queens of the ManyVids trans section.

Literally. These are two proud winners of the 2019 ManyVids award for trans queen of the year AND trans vid of the year. With 724 people signed up to their MVCrush fanclub, there’s a lot of love on ManyVids for this duo.

GenderX.com has this to say about what their site is offering:

Ella Hollywood has had an amazing scene released here just this month with Ricky Larkin and another coming next month.

Exchange pics, get her nudes and get sneak peeks of upcoming scenes.

Hot Asian t-girl Venus Lux loves to dominate her co-stars. As one of the most wanted TS performers, she’s got the world at her feet and she’s shot for many of the big names. However, when it comes to creating her own sex tapes, she wants her co-stars to submit to her. Who can blame her, when she looks this hot?

Where can I find her?

Currently working with Evil Angel as a director, we finish our list with this brunette who looks like the trans girl next door. However, she is anything but.

Where can I find her?

Watch The Hottest T-girls On Webcam